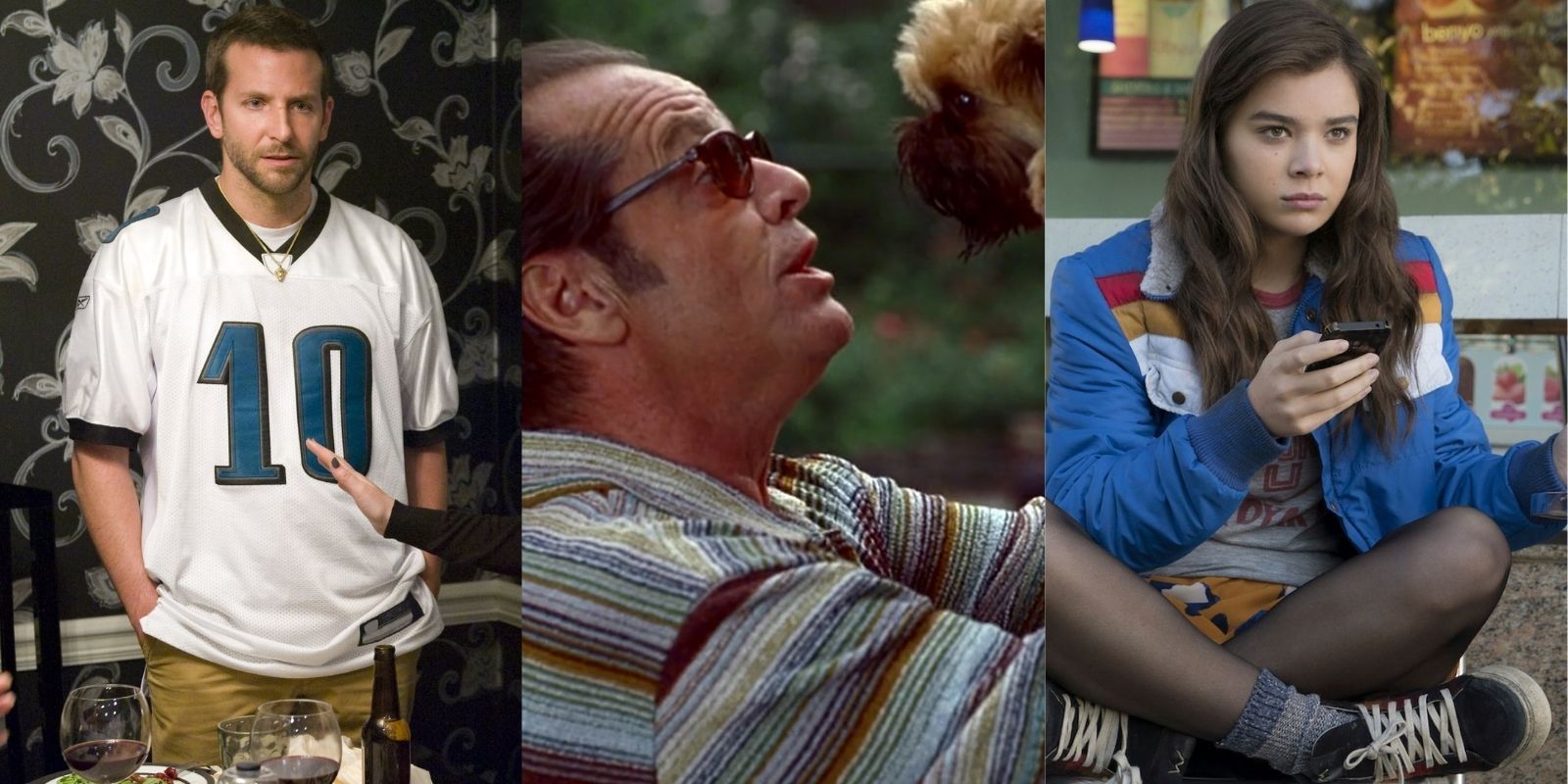 Content Disclaimer: This article discusses mental health issues and disorders that some readers may find triggering.

For years, discussions of mental health in movies have been sketchy at best, often denying the truth behind the mental health experiences people face on a daily basis. Mental health is a growing concern, a topic (finally) more in the public eye, and for those who have grown up in the digital age, a stark reality.

There’s no shortage of big-screen attempts to portray mental illness. Many have flipped and missed, while others have done their due diligence to accurately and sensitively display the issues that real people face. Here are a few movies, streamable on Netflix, that viewers can watch to see how the entertainment industry has approached the subject, whether done badly or well.

Silver Linings Playbook highlights the story of a man diagnosed with bipolar disorder as he seeks treatment and recovers from an incident resulting from a manic episode. His failure to recognize that what he did was wrong further solidifies the accuracy of his diagnosis and the way Bradly Cooper portrays the character. He meets a woman with whom he ends up having a romantic relationship, who suffers from depression.

Jack Nicholson stars in this comedy-drama about a man with diagnosed obsessive-compulsive disorder who must learn to love and accept his gay neighbor despite his homophobia, while working through the symptoms of his disorder that affect his daily life. As good as it gets accurately describes the functional interference and distress associated with the disorder.

Viewers see how Melvin engages in ritualistic behaviors like turning the nob a certain number of times and how he avoids stepping on cracks due to superstitions. It is important to understand that not all of his behaviors are associated with his OCD, some are simply part of his personality. The film was praised for its accurate depiction of the disorder, and the film received Academy Awards for Best Actor and Best Actress.

All the bright places is a book-movie adaptation that was released on Netflix in 2020. Elle Fanning stars in the film alongside Justice Smith as Theodore Finch, a character living with an unnamed mental illness, with many symptoms similar to bipolar disorder . He, along with Fanning’s character, also developed signs of PTSD and depression that match childhood abuse and trauma.

While the movie doesn’t specifically highlight mental illness, it does manage to do a wonderful job of showing how difficult it can be to live with any kind of mental load. The film explores how important it is to talk openly about mental illness, whether it’s the result of adolescence, grief, or abuse.

to the bone was released as a Netflix Original in 2017 and stars Lily Collins as a young woman with anorexia. The film first appeared at Sundance and although it received positive reviews at first, after its release on Netflix, the film opened up more conversations and its subject matter of eating disorders became controversial. If nothing else, it illustrates how difficult it is for filmmakers to responsibly portray the subject of eating disorders on the big screen.

The film offers an insightful look at the issues associated with someone living with anorexia and what the healing process might look like. It does its best not to glorify clutter, however, it’s nearly impossible to avoid the negative backlash that comes with showing such content on screen. Many scenes triggered those recovering from anorexia, which is totally valid.

strange voices was a made-for-TV movie about a young woman with schizophrenia. The film was one of the highest rated TV movies in 1987 when it was released. However, it received mixed reviews, and at a time when mental health discussions weren’t where they should have been, The New York Times called it “too, too late”.

The film discusses the difficulties many faced in the 1980s to receive health care for mental illness, and what happened when they did not receive proper treatment. It also accurately describes the family learning process of someone living with a disorder like schizophrenia. From denial to acceptance, viewers watch the young woman and her family navigate her illness.

The Fundamentals of Compassion (2016)

Paul Rudd and Selena Gomez star in this comedy-drama about a recent divorcee suffering from depression and his unlikely friendship with a disabled teenager he is caring for. Although The basics of support Mainly about this relationship and the struggles Trevor faces as a man who uses a wheelchair, the film does a wonderful job of highlighting the mental health struggles that each of the characters also face.

Rudd’s character struggles with severe depression after the loss of his daughter and subsequent divorce, and Trevor battles the anxiety associated with his disability. Both the film and the book it was based on are heartwarming and filled with light, dark humor.

Another Sundance Film Festival entrant, this Netflix Original premiered in 2020 and follows Sarah’s story as she struggles to find the support she needs while experiencing symptoms of mental illness. horse girl certainly takes a look at mental illness in a unique way, and the film requires more than one viewing to fully understand.

Too often, mental illness is used as the subject of horror and thriller films. However, once in a while, it can be a great way to highlight the scariest aspects of a mental illness. I’m thinking of ending things creates a shocking and psychologically challenging viewing experience for the untrained eye. It takes a deeper look to fully understand the psychosis, anxiety, and even schizophrenia that the main character, Jake, struggles with throughout his life and the timeline of the film.

Writer and director Charlie Kaufman uses abstract, metaphorical storytelling to delve into the mind of the mentally ill lead character in this hidden Netflix gem. The film ends with a riddle, and viewers always wonder if it’s childhood trauma, suicidal contemplation, or schizophrenia, but the film does a great job of showing how one of these diseases can be confusing to someone.

The edge of seventeen is a wonderful portrayal of adolescent angst and does a great job of normalizing mental health issues in school-aged children. Rather than glamorizing the subject of depression, it manages to address Nadine’s experience with it without putting it at the center of the narrative.

Nadine’s experience with depression and anxiety stemming from her self-esteem issues and the loss of her father add depth to the story. Hailee Steinfeld leads this coming-of-age drama with her critically acclaimed performance and the film received many positive reviews and did well at the box office.

This Netflix-produced film received mixed reviews for its portrayal of mental illness and a drug-addicted woman disconnected from her family. Despite the negative critical reception given to Hillbilly Elegyaudiences loved the film and the performances were highly praised, with Glen Close receiving Oscar and Golden Globe nominations.

It’s unclear what exactly Bev’s mental illness, played by Amy Adams, is and she certainly hasn’t been diagnosed, but the film shines a light on the issues a family faces when one of their members goes through this experience, especially when it manifests in drugs. addiction. The characterization is a bit over the top and because of that the film feels inauthentic, but at its core it highlights how untreated mental illness can create tumultuous relationships.

Fantastic Beasts 3 Theory: How Dumbledore and Grindelwald can end the Blood Pact

Savanna Shackleford is a Lists Writer for Screen Rant. She started her career in the film/video industry when she graduated from university with a degree in film studies and journalism in 2019. She currently works freelance in marketing and copyright, but has a deep love for the cinema. His favorite directors are Steven Spielberg and Hayao Miyazaki. She has a deep interest in writing about film theory, the MCU universe, and the latest animated feature films. She currently lives in Philadelphia and you can often find her working as a personal assistant or as a production designer on local films.