Upcoming Movies and Web Series Released on OTT in September 2022 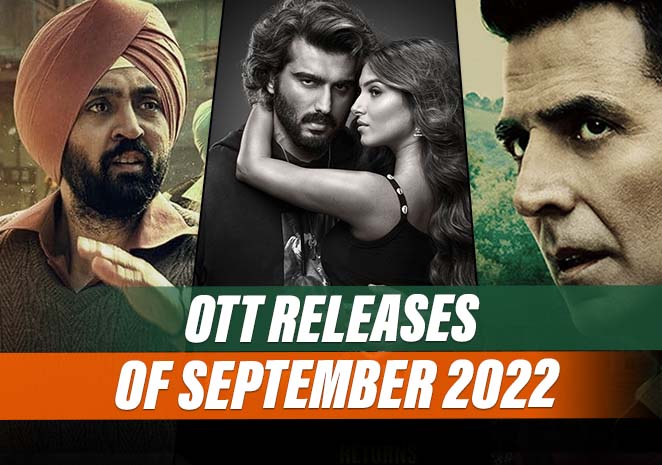 Upcoming Movies and Web Series Released on OTT in September 2022

Do you like to watch Bollywood movies and web series on OTT at your convenience? Then you must be interested in the next releases on OTT platforms.

You have come to the right place, here we have prepared a list of movies and web series that will be released on the OTT platform in September 2022. Check out this list and set your alarm for September releases.

List of Bollywood movies released on OTT in September 2022

After having had a terrible 2022 in theaters so far, Akshay Kumar is now coming to the OTT platform with his new psychological thriller “Cuttputlli”. The official Hindi remake of the 2018 Tamil blockbuster “Ratsasan”. Cuttputlli will premiere on Disney+ Hotstar on September 2.

Bollywood and Vidyut Jamwal’s underrated masterpiece, Khuda Haafiz 2 finally hits digital screens. It is one of the most anticipated films of 2022 as it received positive reviews after hitting theaters. The Khuda Haafiz sequel will air on Zee5 on September 2.

Diljit Dosanjh makes his OTT debut with the release of Ali Abbas Zafar’s Jogi on Netflix. The film is based on the events of the 1984 riots. It became a highly anticipated project as soon as it was announced. Jogi will be released on September 16 only on Netflix.

The Return of Villain Ek

The sequel to the 2014 hit movie Ek Villain hits Netflix on September 21st. Although Mohit Suri’s Ek Villain Returns failed to match the charm of its prequel, it still has a lot to offer on digital screens, such as Disha’s beauty – John’s physique, Some good songs, and a good climax of course.

South Indian beauty Tamannaah Bhatia is making her B-town comeback after a long stretch. A film that tells the story of a bouncer, Babli. The concept sounds interesting, as does Tamannaah’s look. Babli Bouncer premieres on Disney+ Hotstar on September 23rd.

Read also : Bollywood biopic about the heartbreaking life of Madhubala is officially announced!

List of Indian web series airing on OTT in September 2022.

A gossip documentary show based on the lives of Bollywood celebrity wives, rocked the industry in 2020. The hit show is coming back with another season. Neelam Kothari, Maheep Kapoor, Bhavna Pandey and Seema Khan return to take us inside the elite lifestyle of Bollywood brides. The Netflix original show premieres September 2.

A brutal and terrifying documentary, Indian Butcher: The Butcher of Delhi, released in July this year, returns in September. The show will be based on the life of a serial killer and it will definitely be an exciting experience. Indian Predator: Diary of a Serial Killer will be released on Netflix on September 7.

September’s most anticipated webseries is the sequel to 2020’s hit series, Jamtara. The story of young hotties from Jharkhand, who commit scams including Phishing, a police officer leading an anti-phishing mission in the Jamtara district of Jharkhand and then the drama… ohhh!! Jamtara Season 2 also has to answer so many unanswered questions from Season 1. Jamtara Season 2 releases on September 23rd on Netflix.

This was the list of Bollywood Movies and Web Series scheduled for release in September 2022. We hope you have sorted out the best from our list for your binge watch playlist.